The path to adventure starts with Cross triathlon! For the uninitiated, Cross triathlon, much like its more common sibling (on-road) triathlon, includes a swim, an off-road trail ride where a mountain bike is essential, immediately followed by a trail run.  Hesitations about wading in to the off-road world?  You shouldn’t have. Each event within the Series caters to every level of athlete, from the entry level newby that’s never set foot off-road, through to the Elite.

Wait, what?  Triathlon? Off-Road? Trails? Mountain bike?  Huh? We’ve teamed up with Vancouver’s elite Cross racers Julie Robb and Joost van Ulden, who have thrown together a few slides about what makes Cross exciting, fun and attractive to a growing number of athletes here in BC. Take a peek at their slide presentation HERE. 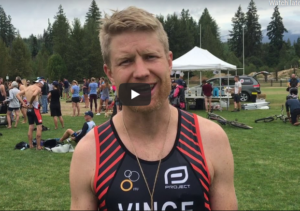 Series events take place on world-class trails carved through lush rain forest, over mountain streams and alongside breathtaking vistas.  With the great outdoors dictating courses, competitors can be assured that no two events will be the same.

“After huge success in our inaugural year, we are thrilled that the Whistler X is back and part of BC’s Cross Series, and that the event will be a qualifying event for the 2022 World Triathlon World Championships!” Said Dale Tiessen, Race Director for the Whistler X.

“We want to provide a clear pathway into backyard adventure and a wholly new experience! Our Cross Series is where athletes can work on building new skills and interact with nature more closely, while still maintaining that familiar three sport experience.” proclaimed Allan Prazsky, Triathlon BC Executive Director. “The Cross scene is so family friendly and welcoming, I’m genuinely thrilled to see this Series finally get off the ground and push past the pandemic. The excitement the off-road Series has already generated throughout the community is palpable.”

“One of the best things about participating in Cross Triathlon is that it helps people achieve something that, for most people, would appear un-achievable! The Series is a fantastic addition to the race calendar, and an exciting opportunity to grow the sport throughout the province with increased exposure.  As a stop on the XTERRA Pan Am Tour, Victoria provides a unique opportunity to race along side some of the top pro athletes in the sport” commented Rob Dibden, Race Director of the Xterra Victoria event.

The points and category format for the Series are still being finalized, and will be in place well prior to the start of the Series.  Watch this space as we build out an exciting post-pandemic return of this Series!